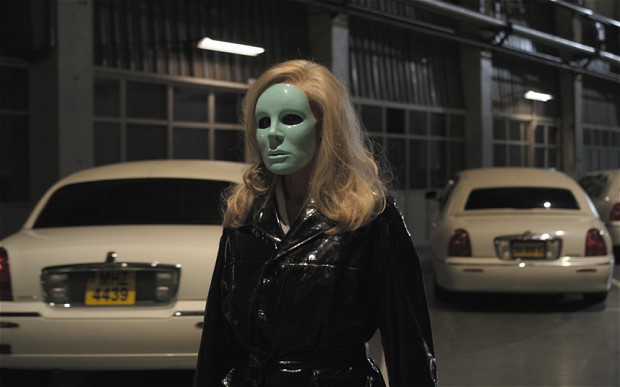 Wow. You may think you have some ideas about what the movie is about based on the above image.  But you have no idea.  Starting with the fact that the above scene is only a minute or two of the whole thing, is towards the end of it all, and is followed by all of the limo’s you see above, talking to each other and discussing their days and their drivers.

I thought I was fan of Leos Carax, but this film may have stretched me to the limits.  Not subject matter wise, not even lack of narrative wise, but really the super slow pacing made it very hard for me to follow.  I think my wife was right in saying this is the kind of movie David Lynch put’s on to relax. When he wants to watch something weird, this is it. Lynch films are straightforward compared to this.

Still I can’t fault a film that has one of my favorite characters of all time, the reprise of Tokyo!‘s M. Merde.  Though I feel this incarnation, by adding to the backstory, and offering perhaps a slightly different take on the Merde’s history, takes away a bit from the shear irreverence of that character as a whole.

In any case, Senior Merde is only one of the ten or so characters Denis Levant takes on.  I am also a fan of his, and continue to be. He does a tremendous job portraying all of the characters in this film and he really dives into each role (on both levels, you’ll see what I mean).

In the end I really appreciate this film.  There just isn’t enough weirdness in this world. Not enough risk taking. Not enough just exploring and following your imagination into some weird sh!t. On that front, this film delivers, and I appreciate that.  Oh and did I mention Kylie Minogue and Eva Mendes also star? go figure.