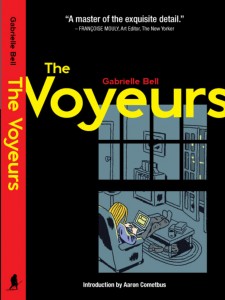 I’m very picky about my graphic novels*. Drawing style is most important for me.  I usually flip through and soley based on the look of the panels make a decision.  Probably not the best way to choose reading materials but that’s the way it is for me when it comes to this genre. I wasn’t familiar with  Gabrielle Bell’s work before, and The Voyeurs almost made it to the discard pile. But I pressed on, I was thoroughly intrigued based soley on the first story, which at first I assumed is what the whole book was named after.

I am glad I pressed on, as Bell’s stories are thoroughly engaging, heartfelt and raw.  She gives a really great look into the life of a creative person, the life of someone who lives in new york, the life of someone brushing against personal fame and success, and the life of someone struggling with the daily minutia of life.  These are all one and and the same for her, and she has no qualms about laying out her insecurities and personal quirks for our inspection and perusal.

In the end we are the voyeurs encroaching on Bell’s life and all of her personal moments and inner thoughts full of self-doubt, introspection, and awkwardness.

* Incidentally I learned form this book that among writers (drawerers? j/k) of this genre, Comics may be the preffered term, as “graphic novel” sounds too much like marketing speak and they really see themselves as comic artists.  I always thought graphic novels distinguishes it from the likes of marvel comics and other such things I would like to distance myself from, when I mention to people one of my favorite genres, but perhaps I’m just pretentious.  I still feel it is an important distinction but I’m open to discussion.