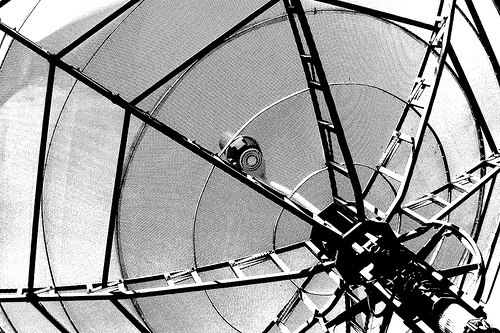 “To test whether I was being paranoid, I ran a little experiment. On a sunny Saturday, I spotted a woman in Golden Gate Park taking a photo with a 3G iPhone. Because iPhones embed geodata into photos that users upload to Flickr or Picasa, iPhone shots can be automatically placed on a map. At home I searched the Flickr map, and score—a shot from today. I clicked through to the user’s photostream and determined it was the woman I had seen earlier. After adjusting the settings so that only her shots appeared on the map, I saw a cluster of images in one location. Clicking on them revealed photos of an apartment interior—a bedroom, a kitchen, a filthy living room. Now I know where she lives.”

But this is the future. I don’t think there is any way of getting around it. I remember reading, I think it was The Age of Spiritual Machines by Ray Kurzweil, and he was explaining how in the future there will be absolutely no privacy. He was speaking mostly about tiny cameras, but he made a very convincing argument, and this just adds to the proof.

Yous should check out the full article
from wired