Procrastination from Johnny Kelly on Vimeo.

“You cannot tell art by virtue of medium, or function, or anything else except by the fact of its raising your consciousness to a degree that you are attentive. And so if something produces the state of attentiveness, whether it’s a drawing, or a guy making a cheese sandwich, we can call it art, at least by my description. I have no other criteria for judging what art is.”

(via Design Informer)
(turn your sound down)

The imperfections are all that is left after you repeatedly reflect something through itself. (mirrors, photocopies, audio recording, and now video – anything that is not lossless in it’s copying)

This is a youtube interpretation of “I am sitting in a room” a piece by Alvin Lucier which is probably the most famous artistic application of this effect.

This is the original video. Also a FAQ for this project.

Amazing how quickly we anthropomorphize things. From my own experience I know it’s possible to forge an imaginary connection with a simple blinking LED, if the timing is right, but downright impossible not to anthropomorphize if it has a human face on it, no matter how many wires are sticking out of the back.

What I really enjoy about this video is the different perspectives that the two people in it bring to the robotic creation named Bina48. It’s the kind of disparate dynamic that often comes up when a creator of specific technology and the general public meet. It exists wether the tech in question is a new word processor or the latest humanoid robot, and is not much different from the dynamic between a parent and a stranger looking at the actions of a child.

The public/user go into the situation with certain expectations based on appearance and are usually disappointed as selective shortcomings of the technology bring to the forefront the fact that there are always limitations and our expectations always soar just beyond what is currently possible. On the other hand the tech creator/parent are acutely aware of all the limitations, they don’t push these boundaries, instead they are focused on the technological feat they just accomplished and marvel at the possibilities of whatever specific problem they just overcame. within these boundaries the technologist is able to tease out amazing things out of their creation, this is what they are so proud of when they are presenting something.

Unfortunately it’s really hard for these perspectives to meet. Of course it doesn’t help, when the tech in question responds to an inquiry on friendship, with a rant on world domination. awkward. 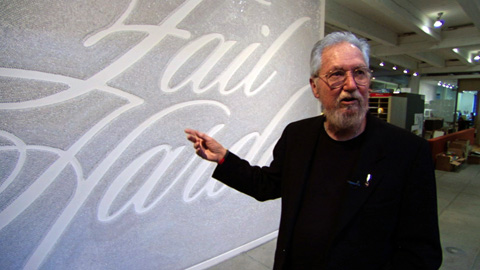 Recommended to me by a friend I was eager to check this one out. Somehow I missed it despite my healthy obsession with watching as many documentaries as possible.

Interview after interview with many people whom I can feel should register as important yet I do not recognize any of them, this is a world I don’t know anything about. The title alludes to the concept, introduced early in the film, that successful advertising campaigns combine art AND copy – the copywriter and the art director need to be in the same room for the kind of synergy that produces great advertising, some of which is important enough to even be “world changing.” I got introduced to a lot of ad campaigns, that I either hadn’t seen before or wasn’t aware of their status as icons in the ad world. I enjoyed this aspect of the film.

The title also references the kinship between the advertising world and the art world. Over and over I was told how a really great ad campaign is like a piece of great art – able to inspire and even effect world change – yeah and sell things. Despite the passionate argument and the obvious dedication and hard work of these genuinely creative people, I couldn’t get over the fact that in the end you’re trying to sell something and the creative output wouldn’t exist at all but for the deep pockets of the company financing you. Sure the most successful campaigns are usually the ones that scare these benefactors the most, and are usually the most out there and out of the box, but I still found this a hard pill to swallow.

As an artist/creative person just about the only kinship/connection I felt with the ad creators was the notion that you really have no idea where your next great inspiration will come from and it’s really hard to muster great creativity on demand, but you can nurture it as long as you have the right environment.

Interactive art for the iPhone/iPad/touch is a growing trend (for example www.iphoneart.org). However, the recent addition of Scott Snibbe’s classics of interactive art to the app store has got to be a milestone in terms of a well established and renowned artist joining this field.

This is very exciting and Scott himself feels like this where art should really be – Art wants to be Ninety-Nine Cents. He’s got an interesting POV on this stuff.

Rhizome also has a recent article on the convergence of iPhone and art.

This is an inevitable step in the evolution of art, and i’m curious what’s next, but for now I’m glad to see an additional and legitimate avenue for artists to get exposure AND get paid.

Love love old stuff, this is 1905 nyc, from the top of
the times building in times square no less.