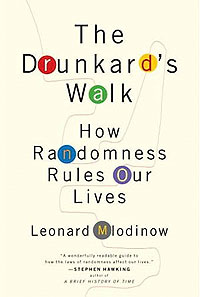 I found Leonard Mlodinow’s The Drunkard’s Walk – How Randomness Rules Our Lives to be a pretty fascinating read. It definitely fits into the pop-science category, so if you want hard-core science or even math it’s probably not for you. But with all of it’s historical interjections, sociology, psychology, gambling tidbits and surprising facts about how our brains handle randomness [hint: badly!], on the whole, it worked for me!

One random, no pun intended, no really, quote that I liked has to do with the fact that we really don’t like/understand things that are truly random. For example when iPods first came out the random playback setting truly was random, with the result that occasionally a song would get repeated or played back-to-back, but to our minds that’s not random. Apple’s response, as explained by Steve Jobs was to make the feature “less random to make it feel more random.” Sums up the human/randomness relationship in a nutshell.

However, the overall lesson I learned from this book, is one Mlodinow comes back to again and again, in different forms, throughout the book. It’s best summed up by this quote from IBM pioneer Thomas Watson: “If you want to succeed, double your failure rate.” It might sound negative but really it’s an encouragement, don’t get discouraged by failure and instead respond with even more attempts. With the way success works, governed by chance more than we realize, eventually you will succeed.