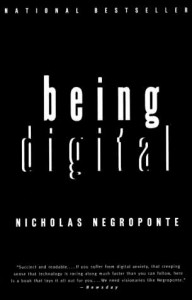 Nicholas Negroponte’s 1996 bestseller was an interesting read. I must say reading old tech oriented books is amusing. So many predictions are so wrong and many futuristic maybes become long gone relics of the past, just a little over a decade later. If we set all that aside, I think this book is still a quite useful read.

Many a CEO or layman of today still have trouble comprehending the fundamental difference between bits and atoms, and the huge implications that difference brings. Now more than ever this discussion is coming to a head, in the music business, in the distribution of media between television, cable and the internet, and finally in the discussions surrounding ebook distributions. “Move bits, not atoms,” is his motto for a reason.

I also think some the ideas he touched on, their heyday is yet to come. This is particularly true of his idea that we should use bits to encode instructions for things, not just as a means of creating an image of something by sampling it. It’s incredibly wasteful and lossy to just encode things by sampling. There are many advantages to vector graphics over raster, advantages to actually encoding text rather than just taking a picture of it, and he even describes how you could encode the information for how a piece of music was made instead of just sampling it at 44k times a second, and in the process shaving off the amount of space it takes up by factor of 1000.

Despite all this, faxes are still around (which take pictures/sample instead of encoding), even though tech people thought they would die a long time ago, and as much as ten years ago Negroponte already thought “the fax machine has been a serious blemish on the computer landscape.” I think the PDF format answers that quest/question nicely.

Here’s a 1994 Wired article that summarizes some of his ideas nicely.