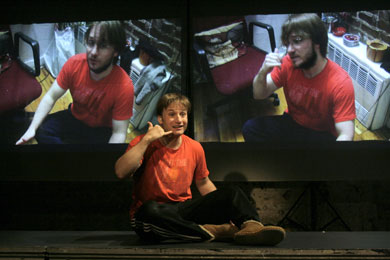 Yes Yes yes! Do I even need to say anything? Obviously they must be doing something right, the original run completely sold out and they have now extended it through April 19th.

I have to warn you, Rambo Solo is not for everyone, not the least of which is having to sit on the floor on shaggy carpeting for 90 minutes. There were times when I was spacing out while trying to manage my pain/comfort/leg falling asleep ratio. Also, sometimes I gauge a performance by how many people fall asleep, and I saw a few victims at Nature Theater’s latest creation.

On the face of it Rambo Solo sounds awful, a 90 minute monologue? of one guy’s obsession with Rambo? The evening starts out oddly enough, a crowded lobby, an extended tour of the theater’s basement, a profound lack of chairs, deep deep shag carpeting, and a distinct lack of space for a comfortable personal bubble.

Then a guy in an orange shirt starts wandering in and out acting a bit strange. Oh yeah, that’s Zachary Oberzan, shouldn’t he be back stage preparing for his role, instead of asking me if I need anything? I wonder what kind of requests he might indulge.

Is this the performance already? (something Claude Wamper-esque?) Eventually he makes his way to the raised platform in the front and the lights dim. Is this still pre-show chatter or the start of the monologue? It’s all so conversational it’s hard to tell.

Wait a minute, the three videos being projected behind him, all feature Zachary, in the same “costume” and are all synced up to his speech? The video was shot at three distinct points of time in the past (this fact betrayed by the progression of Oberzan’s facial hair in each one). How long ago did they start this project? Hold on! Everything is synced, even down to tiny movements such as scratching his beard or forearm, these actions ordinarily done absentmindedly, now it is clear they are choreographed.

Thus begins the delicate interplay between the live actor and the pre-recorded video. This interplay was fascinating to watch. For one, suddenly this was not entirely a LIVE event. For another, there were many times when I couldn’t even see the actor but I would be watching the video instead.

Most of the time the narration was provided by his live voice but occasionally sound effects from the video would fill in for events happening in the monologue, but it worked both ways. There were times when Zachary was only miming a certain prop live, but the video would show an actual prop, and my mind would almost interchange the two. Further complicating the live/video divide is that in both cases he is re-telling a story, at times referencing the original book, and at times reenacting scenes from the movie (and sometimes going into a intellectual discussion of the differences between those two source materials).

Towards the end he even used some members from the audience (so don’t sit in the front if you don’t want to participate) to mimic some extras he used in the video version of retelling the story. Even when the lights eventually went down, a little bit after an odd disrobing though without nudity incident, team NTOK was still playing with us and our expectations for what a theatrical event entails.

At the end of the night, my mind felt suitably massaged, even if my lower back ached, and I even got a hankering to go and try and find a copy of the original book of Rambo. I kind of want to read it now.

Nature Theater is one of the few groups that really engages me intellectually. They are really good at examining, expanding, experimenting with, and including me in their exploration of performance and LIVE art.