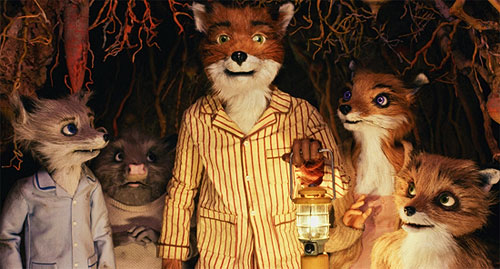 I’m not a Wes Anderson fanboy, but I really liked this movie. I think it was fantastic! It’s really a great film for adults and children alike, and I think I will take everyone’s advice and give it another go, apparently it’s the only way to catch all of the intricate details of the sets and action. (speaking of which I think this might be the only movie where a screen shot, as seen above, actually does the movie injustice. In a film still the little animals look terrible and lifeless, but when animated it’s hard to remember that they are even puppets.)

For some reason, I’ve never read the book version of Fantastic Mr. Fox, but I am a huge Roald Dahl fan. [The Twits is my fave.] I think that might be my only criticism, there was so much quirky Anderson-ness in it, which seems to match this animation style perfectly, that I felt like some of the Dahl-ness was lost. There were some moments that felt almost too real or gory for a children’s movie and even characters who smoked, perfect Roald Dahl, but somehow, the overall quirk, made it really feel like a Wes film. Not a bad thing though, I really enjoyed it and had few good laughs.

[if you have access to it, there was a fascinating article about this creative feat in the nov.2 new yorker. read the abstract here.]