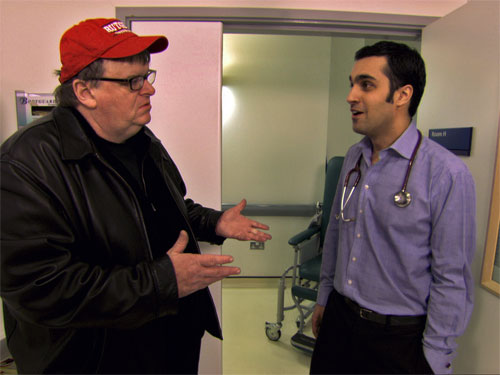 For some reason I haven’t seen Michael Moore’s SiCKO until now. I’m sure Michael Moore did a lot of cherry picking to make his point more convincing and I wish he had offered a few more opponent’s counter arguments with requisite rebuttals. But even taking all of that into account this film offers a devastating account of the health care system in the United States. Just watching this documentary can make you feel sick.

It looks like Moore tried his hardest to rally the troops and make a grass roots rebellion happen, he cites people’s propensity to take to the streets in France as one of the main reasons things are pretty good there. Unfortunately, two years later very little has budged and forces continue to conspire against any kind of change on this front.
(The sheer number of lobbyists and amount of money that is on the table for things not to change, was probably one of the more eye opening and depressing aspects of the film.)

Things like the boat excursion to Cuba, while rooted in reality, are so outlandish and obviously contrived for arguments sake, that I think he is starting to stretch the term documentary a little thin. While he makes a very convincing argument using real footage, maybe documentary is not the best term for a Michael Moore film anymore.