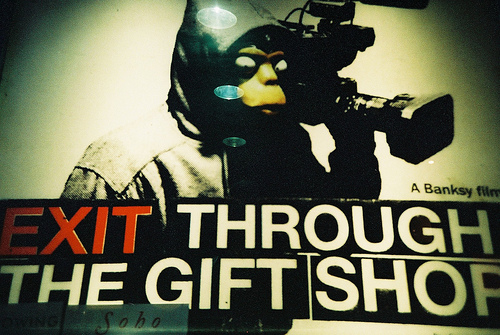 Finally got to check out this Banksy film. Except it wasn’t about him. Wasn’t even that much about street art in general. It’s mostly about this guy named Thierry Guetta a.k.a. Mr. Brainwash. Mr. Brainwash you see, is more famous than Banksy and his work sells for more than even Banksy’s does. He even had a huge street art show in LA called Life is Beautiful. Banksy used to be friends with Thierry, but not anymore. that was before Mr. Brainwash decided to become a famous artist! It’s so easy! Anyone can do it! Just take an iconic image and be ironic with it. Make sure it’s a little rough around the edges, uses lots of spray paint, is in yo’ face, and just has that “street art” style to it.

Now, doesn’t that sound ridiculous? Maybe… …Banksy is just tired of all these real life street-art wannabee’s, it’s so easy to pick up a spray can and mindlessly deface property, and is showing us, through an intricate and elaborate set up, just how ridiculous the celebrity art world can be. Sure, maybe it’s easy to criticize, as he is cashing in, and plenty of people consider him a sell-out, but that doesn’t negate the fact that a lot of his work is actually quite good and a cut above much of what is out there. I definitely enjoy the often site-specific, always thought-provoking and with a distinct unmistakable style Banksy offerings.

As far as a review goes maybe Film just isn’t Banksy’s medium? Too much emphasis on the message and not enough un-fabricated not-mr.brainwash content. I really would have enjoyed more of “Thierry’s” raw footage, and maybe an intellectual delving into the forces driving street art and the artists behind it.